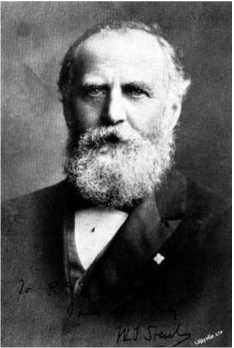 Journalist and Spiritualist William Stead vividly imagined and wrote about ships and storms and the prophetic dreams of sailors and landlubbers alike.

On March 22 1886, he published an article titled How the Mail Steamer Went Down in Mid-Atlantic, by a Survivor. It is a story of a steamer colliding with another ship with many people dying because there are not enough life boats. Stead said, “This is exactly what might take place and will take place if liners are sent to sea short of boats.”

In 1892, William Stead published another story called From the Old World to the New. In this story, a White Star Line ship called the Majestic, rescues survivors of another ship that collided with an iceberg.

The Ship Persian Empire is Bound From Adelaide to London

Also in 1891 and 1892, Stead published a collection of psychic experience stories that he called Real Ghost Stories. One of these stories is about a crewman of the sailing shipPersian Empire who has a warning dream, the consequences of ignoring it, and a sister’s vision.

The sailing ship, The Persian Empire left Adelaide, Australia, for London in September 1868, with a Mr. Fleet serving as third mate. Mr. Fleet befriended another crew member by the name of Cleary and Cleary told him about a dream he had before The Persian Empire left Adelaide.  He dreamed that as The Persian Empire passed Cape Horn in a heavy storm, the captain ordered Cleary and the rest of his watch to secure a boat which was hanging in davits over the side of the ship. Cleary and another crewmember got into the boat. Then a mountainous sea rolled in, washing both of the men out of the boat into the sea and they both drowned. The dream made such a vivid impression on Cleary that he almost didn’t join the Persian Empire crew, but in the end he signed up and sailed with her.

On December 25, 1868, Mr. Cleary’s dream became a reality. The chief officer ordered him and the rest of the watch to secure a boat hanging in the davits. Mr. Cleary refused because he knew that if he went into that boat he would die. The mate took Mr. Cleary below to the captain and the captain entered his refusal to perform a duty in the log. Then the chief officer, Douglas, picked up the pen to sign his name. Cleary looked at him and exclaimed, “I will go to my duty for now I know the other man in my dream.”

Cleary and Douglas got into the boat and when they were making tight a heavy wave struck the boat, overturned it, and   Douglas and Cleary were thrown into the ocean. Three months after Cleary had dreamed his terrible dream before leaving Adelaide, it had come true.

A great gust of wind seized the half slackened main top sail of The Persian Empire and the ship rolled nearly on her beam. Above the howling of the wind, third mate Fleet heard a cry of despair. He watched in horror as apprentice seaman Joe P. plunged headlong from the masthead into the sea.  “Oh, Lucy! Lucy!” the seaman cried as he sank under the waves.

As soon as The Persian Empire arrived in Liverpool, third mate Fleet hurried to the train which would take him to Manchester. He was walking along the platform when he spotted an old gentleman with a young lady on his arm elbowing his way through the crowd. The old gentleman looked so much like the lost seaman Joe P. that third mate Fleet stared at him. In turn, the young woman stared at third mate Fleet. She screamed and said, “Oh look, there’s the face of my dream!”

The old gentleman helped her to the nearest waiting room, beckoning third mate Fleet to follow him. He explained that Fleet’s face had reminded his daughter of a constant, disturbing dream that was haunting her. He said that they were on their way to find out if the owners of his son’s ship had received any news of its arrival.

Third mate Fleet told them that he was a third mate on The Persian Empire and had just left her. The young woman cried that she had seen her brother Joe’s ship in the middle of a terrible storm and she had seen him clinging to the slippery sails. She said, “A bright flash seemed to pass before my eyes, and I saw him falling backwards into the sea. I saw your face in the momentary gleam, and I woke perfectly terrified to hear the sound of my own name —   “Oh   Lucy! Lucy!” whispered in my ears.

Third mate Fleet told the old   gentleman that his daughter’s dream was true. They compared notes and found that his daughter had dreamed the very day, and allowing for the difference in longitude,  the very hour of her brother’s death.

William Stead Defies His Dreams and Sails on the Titanic

William Stead booked passage on the Titanic to sail to the United States because William Howard Taft had invited him to participate in a peace congress at Carnegie Hall. According to Walter Lord in his book, A Night to Remember, when the Titanic hit an iceberg on Sunday, April 14, 1912, Stead helped many women and children into the lifeboats. After they had all gone, he went into the First Class Smoking room, sat in a leather chair, and read a book.

Titanic survivor Philip Mock later spied him clinging to a raft with John Jacob Astor. Mock said that their feet froze “and they were compelled to release their hold.” Both were drowned and William Stead’s body was not recovered. His prophetic dreams about his own death had also come true.

According to William Stead’s daughter Estelle, on April 15, 1912, the day after the Titanic sank, her father appeared at a séance and gave his audience details of the sinking of the Titanic and his own death. His maritime dreams had come true.

Stead, William and Estelle. The Blue Island: The Experiences of a New Arrival Beyond the Veil