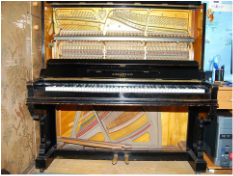 “Music has Charms to sooth a savage Breast..”

Her titanium fingers stroked the prehistoric paper page of the book in her human Maestro Iradan’s music room as Amberia read aloud: “Music has Charms to sooth a savage Breast…”

Puzzled, Amberia looked down at her red cotton shirt with the long sleeves that covered her titanium arms and the long shirt tail that reached to her knee ports. She smoothed the material of her black cotton slacks over her knee ports and over her legs. She had recently chosen to wear human clothes after Clinkscales had installed a new heart guard in her chest. With the heart guard switch frozen on off, she could wear their clothes without being human.

“By the great blue moon of the planet Kulut, Amberia, stop fretting over that book!  It’s time to feed the children and get them off to school.”

Amberia jumped and knocked the book across the table. She looked up inquiringly into the ceiling telescan at her human mistress Mazola Martin.  “My breast is savage?” she asked, doubt coursing throughout her titanium body sheathed with a soft human plastic skin. “Truly my skin does change from silver to whatever color of human clothes I am wearing and red is rather a reflective color, but does that make my breast savage?”

Mistress Mazola Martin stretched herself out to twice her already snaky length and warned, “I have a direct thought web to Clinkscales.”

At the mention of Clinkscales, Amberia felt her guarded copper heart shiver. She feared Clinkscales, the center where musical robots were recycled into inner wall notes, more than she did Madam Mazola Martin’s disapproval.  The Clinkscales penalty for humanizing a heart was instant execution, no recycling into musical notes, just a blast of sound high pitched enough to shatter a music robot into shape notes that Clinkscales immediately vaporized.

Amberia closed her two blue eyes and four yellow eyes, along with the forbidden book. “Yes, Mistress Mazola Martin, my breast is savage,” she murmured curtseying the way that she had learned from the Clinkscales Manual.

“Amberia, see to the children’s breakfast!”

“Yes, Mistress Mazola Martin.”  Amberia curtseyed again and hurried into the dining room. She pushed the button that turned on the inner wall breakfast music. She didn’t recognize any of the cascade of notes that flowed from the walls and ceiling and arranged themselves on a staff in front of her. She brushed past them. She didn’t have time to feed them through her software and pitch the notes in her sensors. The children and their breakfast came first and by the time she had finished feeding them and whisking them off to school, the notes would have rearranged themselves into a different song sequence. Sometimes it was impossible to capture an individual song before the notes transformed.

"To soften Rocks, or bend a knotted Oak…”

Tamor ran over and hugged Amberia, causing the red fibers in her blouse to vibrate wildly and the black leather case to swing back and forth in her hand. “How did you know, Amberia?”

“You have an antique laptop computer and your cape looks like one that Superman wore.”

Mistress Mazola Martin’s voice rang harsh and tinny from the ceiling telescan. “Tamor, that purple cape makes you look like a twentieth century witch. Transform it at once.”

Tamor sat the black leather case down and shrank inside of her cape. Tears rained down her face. Amberia wiped the tears from Tamor’s eyes with her long red shirttail.  “You look beautiful, Tamor and you will have a good time in the Twentieth Century.”

Tamor stood up straight and flung her cape over her shoulder. She smiled. “I love you, Amberia.”

“I love you too, “Amberia smiled and hugged Tamor, but a dissonant warning chord sounded in her inner workings.  Tamor rushed out of the door, her leather cased lap top banging against her leg and her purple cloak floating behind her.

Amberia had just sent the remains of Tamor’s uneaten breakfast down the kitchen vacuum tube when Raythem, Tamor’s fourteen year old brother, roared into the dining room on his self propelled propulsion scooter.

“Turn down your propulsion a notch,” Amberia told him. “You are pasting everything against the walls with your power blast.”

Raythem bent over and turned off his scooter switch. “Sorry, Amberia, I didn’t know I had the power up so high.”

“Nothing for me this morning, Amberia. I have an interview with Leonardo da Vinci. Professor Zian said that Leonardo created a silver lyre shaped like a horse’s head and Leonardo took the lyre to Milan as a peace offering to the Duke of Milan. I want to hear Leonard play his lyre. Maybe we can play together as I am taking my lute with me.”

This time Amberia looked up to confront the image of her mistress. Mistress Mazola Martin stood with both hands on her bony hips glaring down at her son. “Raythem, how many times have I told you that you do not play the lute well?  Indeed, you do not play it at all. You just move your fingers and make it shriek. You will pay me back the money I spent on that lute.”

Raythem jumped off of his scooter. He snatched his lute from the side car of his scooter and threw it on the table. “Here is your lute, Mother.”

“Bring the lute to me,” Mistress Mazola Martin ordered Amberia.

Ignoring her mistress, Amberia caught Raythem’s arm as he tried to storm out the door.

She hugged him close to her heart that didn’t beat, but yet still ached with the pain he felt. “You will go to meet with Leonardo da Vinci and you will play music with him,” she said. “You will play well. You don’t play any other way except well.”

Raythem’s voice was muffled and somehow Amberia knew that tears were clogging his voice. “SHE doesn’t think I play well,” Raythem said.

“Mistress Mazola Martin…I mean your mother…isn’t fully sensitive to you. She will understand you as time continues.” Amberia sat Raythem down in one of the dining room table chairs. “Maestro Iradan understands already. Listen to me, Raythem!”

Amberia picked up the lute from the table. She felt each string and pitched it in her sensors to make sure it hadn’t been damaged when Raythem threw it on the table. She strummed the lute and her fingers picked out a song she had heard.

“That’s beautiful,” Raythem said. Amberia handed him the lute and he played the same tune back to her perfectly.

Amberia put the lute back in its case. “Go play it for Leonardo,” she said, pushing him out the door.

“I've read, that things inanimate have mov'd,
And, as with living Souls, have been inform'd,
By Magic Numbers and persuasive Sound.”

Switching off the ceiling telescan, Amberia moved to the music room. She slid the book she had been reading earlier from the middle of the table. It still lay open at the same page she had left it. A 17th century poet called William Congreve had written the poem called the Mourning Bride. ..”By Magic Numbers and persuasive Sound,” she read out loud.

“That’s William Congreve, 17th century poet.” Maestro Iradan sat at the piano – an antiquated instrument that was now mostly found in museums. Maestro Iradan was one of the few music masters who insisted on playing a piano instead of the more modern omniphones that could reproduce the sound of at least 100 musical instruments.

Amberia hastily slammed the book shut. “I came in to dust,” she said. “I didn’t know you were working in here this morning.”

“I am glad you dusted my book.“ Maestro Iradan turned to look at her, laughing his booming laugh and running his fingers through his wiry gray hair that looked like he had run a tuning fork through it.  “Hugofelis and I are working on an opera for the galaxy concert in the fall.” He leaned over and petted the robocat sitting beside him on the piano bench. Amberia thought that Hugofelis looked like he had originally been designed to be a tabby cat and then someone had changed the plans in the middle of the design and ordered a calico cat. Hugofelis was such a mixture of genes that he looked like one of the old patchwork quilts that the Mistress Mazola Martin had bought especially for her bed and then had discarded and given to Tamor and Raythem.

“What does your opera sound like, Maestro Iradan?” Amberia asked.

Maestro Iradan turned back to the piano. “I will play you a portion he said,” pushing a button. “My piano has a recorder on it and I write entire symphonies and play them back to work on them. Hugofelis is a severe critic, but we make a good harmony together.”

Amberia listened, her sensors at full alert. She was glad that her heart didn’t beat because she wanted to hear the full sound of the Maestro Iradan’s symphony. She heard nothing but Hugofelis purring.”

Maestro Iradan sighed and shook his finger at Hugofelis. “You have done it again!” he said. “You have erased my symphony and this time I didn’t save a copy. I will have to create another symphony another day for you to hear, Amberia.”

“I think I know the melody you used to start your symphony,” Amberia said. She hummed the same tune that Raythem had played on his lute.

Maestro Iradan clapped his hands and Hugofelis jumped down off the piano bench. “Come up here and play it for me,” Maestro Iradan said.

Amberia and Maestro Iradan played the piano together for what seemed to Amberia like hours. They wrote a complete symphony together and this time Maestro Iradan saved two copies and Amberia recorded two in her sensors.

Maestro Iradan and Amberia were lingering over the last note when a screeching that sounded like an old fashioned fire siren sounded from the ceiling telescan.

“Amberia, have you finished that dusting yet? It’s time to prepare dinner and get the telescans ready for the children’s home work.”

Amberia slowly got up from the piano bench. “Yes, I am finished with my dusting Mistress Mazola Martin.”

“I am a robot. Robots cannot love. We have no heart or independent intellect.”

“It is important that you understand that fact of your life, Amberia. If you follow my example you may stay. You must nurture a savage breast to survive and stay here.”

Maestro Iradan smiled at Amberia and she felt warm tender feelings for him and his children. She felt like stuffing a lute into Mistress Mazola Martin’s mouth.  Amberia shivered. The heart switch must have accidentally clicked on when she moved the book.

Amberia felt the heart switch with her long titanium fingers and discovered that it was still frozen on the off position. She couldn’t move the switch, yet her heart beat and swelled with music. Now it was up to her to decide whether to go to Clinkscales for repairs or to deal with the broken heart herself.  Amberia turned around and played a note on the piano before she hurried out of the room.