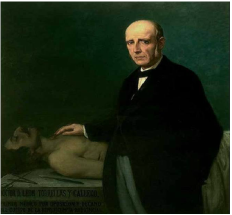 Most 19th century Americans did not turn to doctors for their first choice of healer. Doctors made house calls, had few tools, and could not offer many treatments more effective than home remedies. They rarely had enough business to support being full time doctors, so they held second jobs such as farming, as well. Midwives, nurses, pharmacists and family members also practiced under these conditions. Dr. Benjamin Rush was one of the most influential physicians in early United States history. His medical ideas such as bloodletting and purging were controversial, but he made important contributions to the development of medicine in the United States.

Female Midwives and Granny Women Are Important Medical Mainstays Doctors were not all male in the early 19th century. Millions of unnamed and unsung female midwives placed newborn babies in their mother’s outstretched arms outlined by flickering flames from the fireplace. Doctor midwives like Aunts Tamar Thompson and Aunt Nancy Range also nursed fevers and diseases with a cure-rate that often exceeded male practitioners. In her diary, Martha Ballard, a New England midwife, fought a constant professional battle against male doctors who believed that they had superior knowledge, and diagnosed from afar. Martha had a hands-on, in the home knowledge of her patients and treated them more effectively.

At the beginning of the 19th century, just a handful of medical colleges and hospitals existed and doctors usually made house calls to see their patients. Doctors served a two year apprenticeship without fulfilling formal educational requirements. A few doctors did attend college and study in Europe before they returned to America, but they were the exception and usually clustered together in large cities. Most doctors received their training in privately owned and operated propriety model medical schools where a student was virtually guaranteed a degree.

The Medical Profession Grows Along with America Between 1765 and 1800, five medical schools produced 250 doctors; between 1830 and 1840, orthodox schools produced 6,800 doctors; and between 1850-1860 orthodox schools produced 18,000 doctors. By 1830, fifteen states had passed license laws and the medical profession modeled its codes of ethics and behavior after the British code of Thomas Percival. Few medical school graduates were more than nominally qualified. Antebellum physicians continued to be hindered by the lack of knowledge of the causes of disease and by a trial and error methodology and therapeutic systems that featured massive bleeding and purging as keynotes of healing.

The War Between Allopathic and Homeopathic Medicine As America began to grow and expand so did the medical profession and it, too. divided into two warring factions as did America. Medicine divided into orthodox or mainstream sectors and medical sects. The cholera epidemic of 1849 widened the gap between the two schools of medicine in America – the allopathic and homeopathic. The law of similars or the idea that like is cured by like is the fundamental principle of homeopathy. Samuel Hahnemann of Leipzig, Germany first applied this principle in the early nineteenth century and called it homeopathy to distinguish it from the medical establishment which he called allopathy.

The American Institute of Homeopathy was founded in 1844, and physician and senator Royal S. Copeland popularized it in the United States. Homeopathic adherents had observed that quinine given to a healthy person caused the same symptoms that malaria did in a person with the disease, so quinine became the preferred treatment for malaria. When a drug was found to create the same symptoms as a certain disease, it was used in small doses to treat the disease.

Aunt Tamar and Aunt Nancy Range Still Visit Patients Dr. Samuel Arminius Latta, who practiced in Cincinnati, Ohio at the time, wrote a pamphlet about the cholera epidemic in 1849 that graphically illustrates the bitterness of the disagreement between the two schools of medical thought. In his introduction he states that in May 1849 soon after the appearance of cholera in Cincinnati, “The Homeopathic, Eclectic, Indian, and Negro Doctors with other irregular practitioners” published extravagant claims of cholera cures in the secular press to the disgust and dismay of the Board of Health and the allopathic physicians.

Dr. Latta commented that the members of the “regular profession” pursued the even tenor of their way, contending by day and night with the angel of death as he silently struck among the masses in the street, or in the family circles of the mansion, the cottage, the garret or the cellar. “ Dr. Arminius reviewed the report of the supposed homeopathic cure for cholera read before the Homeopathic Association and scathingly denounced it.

As the century wore on, many of American’s leading physicians were influenced by French clinicians and began to question the dogmatic therapies of the older medicine. In Erie County Pennsylvania Aunt Tamar Thompson and Aunt Nancy Range did not trouble themselves about warring medical theories and disagreeing doctors as they rode the narrow bridle paths on the way to isolated cabins. They were most concerned about their families, crops and weather, healing their patients, and driving away disease.

Conevery, Bolton Valencius, The Health of the Country: How American Settlers Understood Themselves and Their Land, Basic Books, 2002

Walker, Captain Augustus, Early Days on the Lakes with an Account of the Cholera Visitation of 1832, The Cornell Library, New York State Historical Literature

Wilson, David, History of the Settlement of Union Township