Poetic About Pigeons and Dewy-Eyed About Doves 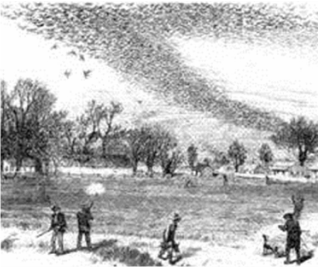 Is it sensible to wax pragmatic and poetic about pigeons – within reason and outside of hunting season?

Since hunting season is different in different states,  let’s take a pragmatic-poetic look at pigeons and doves.

Like nephews and cousins, pigeons and doves come from the same biological family.  It’s people who call some of them pigeons and others doves. And their family tree covers lots of numbers and territory. There are about 290 different species of pigeons/doves and they can be found everywhere in the world except the North and South Poles and the colder parts of the temperate zones.

Pigeons come in all shapes and sizes from about six inches long to the greater crowned pigeon of New Guinea, which grows to be about 32 inches long.  The feathers of the pigeon/dove are soft and thick and on the tropical species, brightly colored in green, yellow,blue, brown and purple hues. Their heads and necks are small, compared to the rest of their bodies. The passenger pigeon was about 16 inches long and the mourning dove is between 12 and 13 inches long.

Most pigeons eat seeds, fruits, and sometimes insects, worms, and snails. They live in forested areas and build their nests among tree branches. In the nests they lay one to three white eggs and both parents care for the eggs and the young birds.

The mourning dove is the most common of the smaller North American wild pigeons. You can see the dove hopping in your backyard, sitting on your telephone wires cooing or looking for food in the fields near your house. It makes a sad cooing sound and is well-known as both a game bird and a songbird. Conservationists try to control the number of doves killed by hunters.

The story of another game bird, the passenger pigeon, illustrates the need for wise game management. Before 1880, billions of passenger pigeons lived in the United States. The passenger pigeon was slightly longer and slimmer than the domesticated pigeon. Its back and wings were a rich blue-gray and its breast ruddy brick red. It could fly swiftly and perhaps that’s why hunters usually killed it in its nesting grounds.

Arch Bristow in Old Time Tales of Warren County, (Pennsylvania), writes some accounts of pioneers and their experiences with passenger pigeons. Dawn breaks on Tionesta Creek, September 1862. Mrs. Samuel Baker wakes her son, Roger, telling him to take a binder pole and knock down a mess of passenger pigeons before breakfast. Roger hurries down from the loft, grabs a long hickory pole andclimbs a hill behind the cabin. As he climbs, a gray mass of whirring wings passes above him. It is the regular early morning flight of cock pigeons leaving the roost to fly to their feeding grounds.

Roger didn’t have to hurry because the pigeons flew over for nearly an hour. He didn’t even have to stand upright with his pole. He sat on the ground and planted the pole between his knees. Occasionally he would thrust the pole forward and down some of the pigeons.  He frequently had to duck and doge, because a passenger pigeon moving at fifty miles an hour could deliver a hearty smack in the face. Men had been knocked from their saddles by flying passenger pigeons.

Roger brought down stunned and crippled pigeons and snipped off their heads with a pair of sharp nippers that his father had made. Then he put the pigeons in a bag. It didn’t take him long to collect far more than his mother could use in a stew.

Ed Campbell of Warren netted hundreds of passenger pigeons by building “salt beds” which lured them to the ground.  Then he built bough houses which hid hunters with nets. Ed also owned a stool pigeon, which was one of many used in Warren County to capture pigeons. A stool pigeon was always a male bird, captured alive and well-fed. Ed attached the pigeon’s leg to a low stool with a string about eight to ten feet long. The captive pigeon fluttered on his tetter and lured relatives in the sky down to their doom.

H. Dunham of Warren remembered the pigeons going over “like the roar of a big hailstorm,” and John Logan of Armitage Corners said, “When we wanted pigeons, we took a bag and went into the woods at night. We carried torches made of fat pine. There would be plenty of birds roosting on low branches. We just caught as many as we cared for and came home.”

The sharply defined area of a pigeon roost would contain as many as a hundred nests filled with pairs of plump young birds. The Indians had a clever way of capturing the nesting birds. They would raid the roost with a bow and handful of blunt-tipped arrows and strike the slender limb holding the nest. This would jar the young birds.  Since they couldn’t fly yet, the squabs fell easy prey to the Indian.

All of the pioneers that Arch Bristow interviewed remembered the deafening noise in a pigeon roost at morning and evening. Feathers covered the forest floor and small tree branches, broken down by countless birds, hung everywhere. Even heavy beech limbs were splintered by the weight of countless roosting birds. And when the pigeons visited a pioneer farmer’s grain field, the event was serious. Perry Nichols said, “They would roll over a field like a wave, the birds always fluttering a little way over those which had come down just in front of them. It was like a big wave curling over and under.”

The passenger pigeons must have saved the lives of many a pioneer family, since they were so easy to capture and easy to eat. They were plump-breasted, solid birds and just a few of them provided food for a family. Many housewives saved just the breast, which consisted of tasty white meat. They would hang the pigeon breasts on strings, smoke and dry them. Many pioneer cabins had hundreds of dried pigeon breasts hanging in the lofts to be used in soups, stews, and pigeon pot pie during the winter.

Between 1880 and 1884, the passenger pigeon disappeared from Warren County. An old resident from Barnes recalled seeing twelve barrels of pigeons shipped by express from Sheffield in a single day in 1878. The birds were sent to New York markets and sold for fifty cents a dozen. Hunters from other parts of the country killed the pigeons in their nesting areas, shipping them to cities in freight cars and sold them at food markets for about two cents a piece.

The last small pigeon roost in Warren County was located near Tidioute in 1884, but the passenger pigeon hasn’t been seen in this region since. Some people don’t think that the hunters exterminated the pigeons. Some people said that large numbers of them were seen floating dead in the sea. Others said that countless numbers of passenger pigeons died of disease in the south. Some farmers from Warren County in the 1930s insisted that they had seen small numbers of the wild pigeons.

The encyclopedia says that the last known passenger pigeon died in the Cincinnati Zoo in 1914. Arch Bristow writes that their “complete extinction is by no means proven.”