Is Shishmaref, Alaska a Portent of Things to Come? 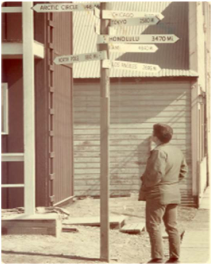 Left.  How far is Nome, Alaska from the Arctic Circle? This sign post, located in Nome, will tell you.

Second from left.  The lines in Frieda’s face represent the Eskimo past, present, and future survival of her people.

Third from left.  An Eskimo graveyard. Eskimo dead are buried with their possessions to ensure their comfort in the after life.


Fourth from left.  Life is rugged in Alaska.
Photographs by Norma Stephenson 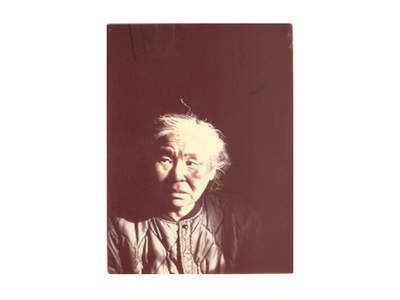 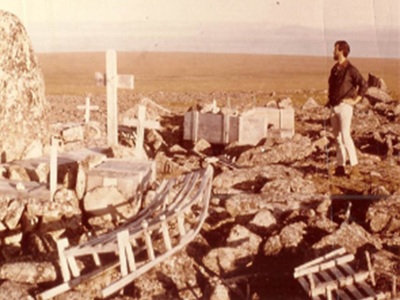 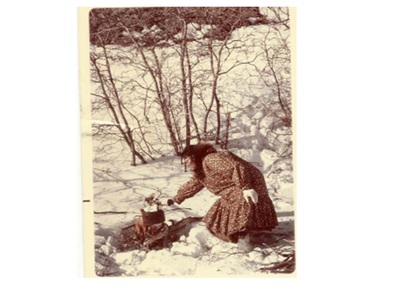 The history and geography of Shishmaref, Alaska, 126 miles north of Nome, has combined to carve its place in environmental history as one of the first towns in the world that needs to be relocated because of global warming.  Shishmaref is located on Sarichef Island in the Chukchi Sea, just north of the Bering Strait, just under the Arctic Circle, and five miles from mainland Alaska. Covering three square miles of land and 5 square miles of water, Sarichef Island is part of a 62 mile barrier island chain exposed to unique erosion factors because of storm surges and high tides.  The subsoil under Shishmaref is thawing and the Chukchi Sea is sweeping away the island.

Shishmaref’s climate comes with critical challenges. Sarichef Island has a transitional climate positioned between the frozen Arctic and the Alaskan continental interior. Its summers are often foggy, with the average temperature fluctuating between 47 and 54 degrees. Winter temperatures can range from minus 12 degrees to two degrees above zero, with snowfall averaging 33 inches per year. The Chukchi Sea usually freezes from mid-November through mid-June.

Rising global temperatures have melted the sea ice which traditionally protects Shishmaref from storm surges and simultaneously is melting the permafrost which comprises the foundation of the village. In October 1997, a severe storm eroded over 30 feet of the north shore of Shishmaref, threatening homes and destroying winter food supplies. Villagers relocated 14 homes away from the eroded bluff, and eventually built a protective seawall.

In the past few years, the shoreline of Shishmaref has receded at an average rate of ten feet per year, which surpasses other parts of the entire island chain and makes Sarichef Island and Shishmaref particularly vulnerable to global warming. Most of Shishmaref’s 563 people (according to the 2010 census) are convinced that within the next ten years they must move their community several miles to the south on the mainland, although it will cost an estimated $180 million dollars.

Although Eskimos originally called it Kigiktag, Shishmaref is the name that Lt. Otto Von Kotzebue gave the inlet in 1816 after a crew member. Shishmaref’s current residents represent a more than 1,000 year lineage of Inupiaq Eskimo people and in 1821, archaeological digs at “Keekiktuk” identified artifacts establishing Eskimo settlements from centuries ago. In 1900, entrepreneurs established a supply center for gold miners on the Seward Peninsula, and renamed the village Shishmaref, after Shishmaref Inlet.

A traditional Inupiaq Eskimo village, Shishmaref residents hunt and gather much of their food, relying on sea mammals that including seal, walrus, fish, caribou, moose, and birds. They live in mostly single story pre-fabricated houses, which are frequently damaged from erosion. Main Street-Airport Road, Housing Trail and Clinical Road are the three main roads in Shishmaref and they do not connect with the outside world beyond Shishmaref. Air and water are the primary means of entering and leaving Shishmaref, with most people owning boats for mainland trips. Shishmaref School, the only school in the village, educates ages pre- kindergarten through twelfth grade and it has a current population of 183 students with 19 teachers.

In 1952, Isabelle B. Bingham, an A.N.S. teacher at Shishmaref Day School in Shishmaref talked to her class about the foods needed for good health. She asked the children how their mothers prepared native foods and how they preserved them for winter use and she suggested that they make a cook book to share with other people.

“All the more reason to make one,” answered Miss Bingham.

She asked each of the children to bring in a recipe and offered them points in their school contest for bringing in one. Soon there were enough recipes to print The Eskimo Cook Book and it was so successful that the Alaska Crippled Children’s Association printed thousands of copies to fill requests that poured in from all over the United States. Here are a few recipes from the Eskimo Cookbook that graphically illustrate the lifestyle of the community.

Cut the walrus in small pieces and also cut the coke.* Then put them together in the pot to boil. Add salt and water.  Tholma Olanna

*Coke is the skin and blubber of walrus.

Cut the caribou into small pieces. Add onion, salt, and pepper. Cook in pan for 20 to 25 minutes. Mix flour and water together for thickening. Add to the cooked meat. Stir and cook 5 to 10 minutes more.

Sea is one of the most common kinds of food in this part of the country. We have three kinds of seal. The (hair seal) common seal, the spotted seal and ribbon seal. We use them for food and skins for clothing and mukluks. There aren’t any fur seal up here.

Soured seal liver is made in the summer time. Place liver in enamel pot or dish and cover with blubber. Put in warm place for a few days until sour. Most of the boys and girls don’t like it, except the grownups and old people. I don’t like it either.

After they cut the seal, they always take the liver from the seal and lay it on a platter. They take it outdoors to freeze. When it freezes they always eat it with seal oil.

Wash liver and cut into pieces. Put into frying pan; add salt and pepper and onion and then fry.

Sprinkle sea liver with flour, salt, and pepper. Fry in oven with little lard in pan.

Seal oil is made from the blubber or fat next to the skin of the seal. The blubber and skin is cut off the skin, cut into strips and stored in seal pokes or tins. If left where warm or during the summer, it renders itself. From this you have the seal oil.

Cook the small intestines about 5 seconds in boiling water. Old men and women always want to eat them.

These recipes are in danger of becoming as obsolete as the traditional Eskimo way of life that is being increasingly challenged by global warming. According to the Shishmaref Erosion and Relocation Coalition comprised of the city IRA Council and other organizations, there is no central government organization to help Shismaref relocate to the Alaskan mainland. The United States Army Corps of Engineers estimates that the move will cost about $300,000 a person or more than $180 million.

According to a story by Alex DeMarbau in the Alaska Dispatch of January 16, 2014, Alaska representative Don Young, who helped to sponsor a bill introduced in Congress that would eliminate the Environmental Protection Agency’s authority to deal with carbon pollution from coal fired power plants, told a delegation of Shishmaref citizens that getting federal funds for a move won’t be easy. The American government has told Shishmaref that there is no federal money to help them move, but Secretary of State John Kerry announced in December 2013 that the United States plans to give Vietnam $17 million to deal with climate change.

As part of their testimony, Shishmaref residents told Congress about the environmental changes in their home. Hunters have fallen through weak ice and drowned, and a beach has disappeared and so has digging for clams on that beach. Warm weather spoils food, and winter fishing often starts weeks behind schedule when the lagoon doesn’t freeze. Ocean waves batter Shishmaref with sledge hammer ferocity because the ice that formerly protected the coast forms much later. Environmental changes have made it difficult for the community to keep good teachers for the school, make school improvements, and persuade other organizations to spend money in the community because of uncertainty about its survival.

Shishmaref residents told Congress that the road to the landfill had been washed out the autumn before when a storm hit the coast, effectively closing the dump until the ground froze.  Former Mayor Stanley Tocktoo said that a few more big storms could wipe out the airstrip, cutting off the village from emergency flights. “No matter what your politics, you can’t ignore the facts. The facts are that our village is being impacted by climate change on a daily basis. And we need you to do something about it,” he said.